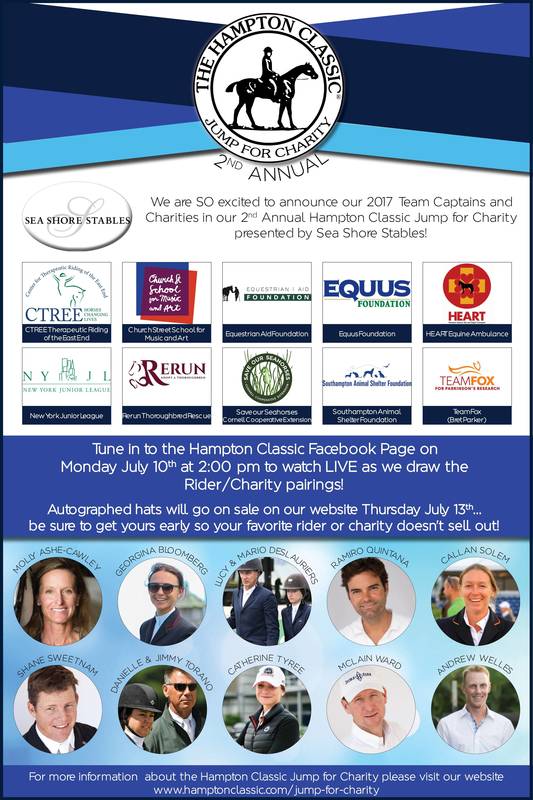 Bridgehampton, NY – June 29, 2017 – The 42nd annual Hampton Classic Horse Show, August 27-September 3, is excited to announce the return of its Jump for Charity. As a 501(c)3 non-profit organization in its own right, The Hampton Classic also works to support other charities’ efforts. This year the Classic continues its tradition of giving back to local non-profit organizations and equestrian-related causes by hosting its second annual Jump for Charity presented by Sea Shore Stables.

For the Jump for Charity, 12 initial riders (eight individuals and two teams of two) will be paired randomly with 10 charities that are dear to the hearts of Hampton Classic staff. These riders will be team “captains”. The pairing of the captains with the designated charities will be drawn LIVE on the Hampton Classic's Facebook Page on Monday, July 10 at 2:00 pm EDT. The remaining riders competing in the $86,000 Douglas Elliman Grand Prix Qualifier presented by LONGINES will be drawn on Thursday, August 30. This will enable every rider competing in the Qualifier, Friday, September 1, to have an opportunity to win money for their paired charity.

Funds are raised through the sale of 30 uniquely designed caps for each charity/rider team that will feature the Hampton Classic logo, the charity name, the team captain name, and the team captain autograph. The hats will go on sale through the Hampton Classic website on Thursday July 13 and 100% of the funds will be distributed as follows: $1,000 to the third place charity, $2,000 to the second place charity and the remaining funds to the charity of the highest-placed rider. Only the top placed rider for each charity will qualify for the cash award for their charity. Last year, a win by McLain Ward earned $16,100 for Caring Hearts for Canines.

“It’s tradition for The Hampton Classic to give back to the community and this year we are really excited to continue the Jump for Charity program we initiated last year,” said Shanette Cohen, Executive Director of the Hampton Classic. “This will not only raise money for charities, but also generate an even greater amount of excitement around one of our featured classes. We are especially grateful for Sea Shore Stables’ sponsorship of this program.”

The autographed hats, available for $100 each and 80% tax deductible, may be pre-purchased on the Hampton Classic website beginning Thursday, July 13, or purchased on-site at the Hampton Classic ticket booth and information booth, while supplies last. Pre-purchased hats may be picked up at the Classic beginning August 27, or the hat can be shipped in September. If all of the hats sell, a total of $30,000 will be raised.  Thanks to the sponsorship from Sea Shore Stables, all expenses of this initiative are covered, enabling 100% of the monies raised to go to the winning charities.

The charities in the Jump for Charity offer aid to a variety of causes including animal welfare and rescue, equine emergency relief, environmental preservation, medical research, poverty and childhood education, and community volunteer programs. This initiative adds to the excitement and allure of the already elite equestrian event.  To learn more about each charity and their cause, visit the Jump for Charity page on the Hampton Classic’s website and click through each charity website or follow them on their social media platforms.

The participating riders are:

The participating charities are:

“It is truly an honor to be a part of this effort and try to raise money for a local charity that aids the community on a daily basis. It will definitely motivate me when I enter the ring that Friday, but whether or not I succeed in earning the prize for my charity, I will feel proud to have helped this worthwhile effort,” said two-time Olympic Gold Medalist and six-time Hampton Classic Grand Prix Champion McLain Ward.

“Everyone at HEART is extremely grateful to be involved in The Classic’s Jump for Charity program again this year. We are looking forward to the show – especially the Douglas Elliman Grand Prix Qualifier! We commend the Hampton Classic for its efforts to support all of the charities involved,” said Robin Sweely, President of HEART Equine Ambulance.