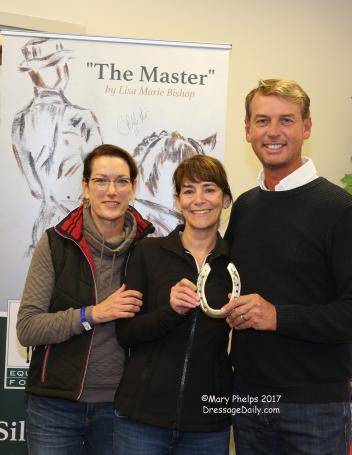 The top-priced auction items were presented to the winners on the closing day of the symposium. Hester admitted he took the silver-plated shoe from Charlotte Dujardin’s desk.

“We made nine of these shoes which have all been donated to charity,” Hester said. “Now I have to tell Charlotte the last one went to America.”

Other items included an original painting of Hester and his horse Nip Tuck titled, “The Master” by artist Lisa Marie Bishop with Hester’s signature, and a signed banner photo collage of Hester, Nip Tuck, Dujardin and Valegro created by DressageDaily’s Mary Phelps.

In total, nearly $8,000 was raised for Equestrian Aid Foundation. Hester said he was thrilled that the auction went so well.

“Not only did I have great riders and horses to train, Valegro’s shoe raised $5,000 for the Equestrian Aid Foundation,” he said. 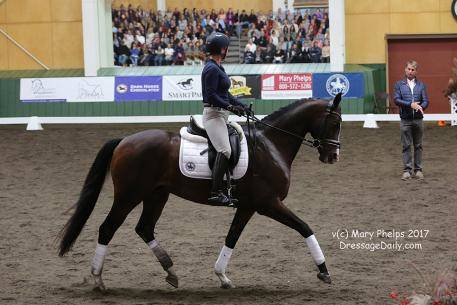 The auction was orchestrated by Markel’s Mary Phelps, a Gold Sponsor of the event. Phelps has been a supporter of Equestrian Aid Foundation since its founding in 1996.

“Let’s face it,” Phelps said. “Carl is a rock star and so is Valegro. People were stalking the bidding table until the closing bell.”

“We are grateful to Mary Phelps for the success of the silent auction,” Gray said.  “For two decades, Mary has exemplified our ‘Show You Care’ motto. The Equestrian Aid Foundation helps people across the country involved in all facets of the horse community.  It is through the efforts of our supporters like Mary and Carl that we are able to provide financial assistance, hope and dignity to help our recipients heal.”